Much More Than Just Hummus & Pita

“Don’t judge a book by its cover,” they say. Likewise, don’t judge a restaurant by its name, for behind a simple name one will uncover a cozy and fast-casual restaurant that offers an array of fresh made and mouth-watering dishes from over ten countries around the Mediterranean Sea - The Hummus & Pita Co., located in the Greater Danbury area.

“Don’t judge a book by its cover,” they say. Likewise, don’t judge a restaurant by its name, for behind a simple name one will uncover a cozy and fast-casual restaurant that offers an array of fresh made and mouth-watering dishes from over ten countries around the Mediterranean Sea -  The Hummus & Pita Co., located in the Greater Danbury area.

The Hummus & Pita Co. (H&P), was founded in 2011 in New York City’s Chelsea neighborhood by Janice Axelrod. There are three locations in New York City, but the Brookfield restaurant is the first outside of that market.

For the owner, Saiyam Shah, bringing The H&P to the Greater Danbury area was a mission.

“When I came across The Hummus & Pita Co., I was mesmerized by a concept that serves such delicious, diverse and fresh food,” he said. “At that point, I decided that I must bring such a wonderful restaurant and food to my community. Hence, my journey in the restaurant industry started. It might surprise you that I had never touched fish or meat or even egg in my life until I started training for The Hummus & Pita Co.”

Saiyam comes from a family that he describes as “not rich, but wealthy by our culture, value, love and respect for every living creature in the universe.” That reflects on his passion for cooking, serving and hospitality.

But what makes The Hummus & Pita Co. stand out from other restaurants serving similar food?

According to Saiyam, it is the fresh-made food with quality ingredients that tops the list along with a menu that includes Vegan, Gluten Free and Vegetarian options.

Hannah Thyne, of Danbury, agrees and adds that H&P is a perfect choice for her family. “My husband and my son are vegan. I am getting them the Vegan Shawarma. The food here is fresh and you have a lot of options. I would absolutely recommend it,” she shared.

More than just a meal, the cultural intricacies behind each dish are fascinating. Shawarma, for example, consists of thin, rich, succulent slices of meat, stacked in a cone-like shape, and roasted to perfection on a slowly-turning vertical rotisserie. This flavorful dish is originally made of lamb or mutton (older sheep), but Saiyam also offers chicken.

Christopher Myles Ogiste, of Danbury, once visited H&P to pick up an order for his coworkers. After stellar reviews, he decided to go back and try it out for himself. “I was extremely happy with what I had, the Gyro Laffa with everything spicy I could stuff in it… it was delicious! I tend to pride myself on discovering across the world in terms of what food I want to eat; there is so much great stuff out there. People should definitely try The Hummus & Pita Co.,” he suggested.

Yomahira, who has been part of H&P’s staff for two years, connects the work environment, Saiyam’s respect for the staff and the freshness of all products as the secret ingredients to please the restaurant clientele.

“All products are fresh and high quality. Each item is labeled carefully with the expiration date. We offer 28 different fresh salad ingredients that are prepared daily. The same applies to the meat. We marinate it and cooked every day,” she explained, adding “We follow all health and safety codes. During this time, we respect all the safety guidelines.”

“We are what we eat. Food is supposed to provide health and energy. Eat well, eat healthy, eat fresh. Come meet me at The Hummus & Pita Co. I promise that you will love the food and our hospitality,” concluded Saiyam.

The Hummus & Pita Co. is located at 15 Federal Road in Brookfield, CT. It is open Monday thru Saturday from 11 am – 8 pm, and Sunday from 11 am – 7 pm. Customers can download H&P’s app and save $3 on their first order, or call 203-546-8879 for take-out and curbside. Delivery is powered by Uber Eats, Grubhub, and DoorDash. Spanish-speaking staff are available.

Saiyam Shah, owner of The Hummus & Pita Co. in Brookfield, with his staff members Yomahira, Ann and Anne 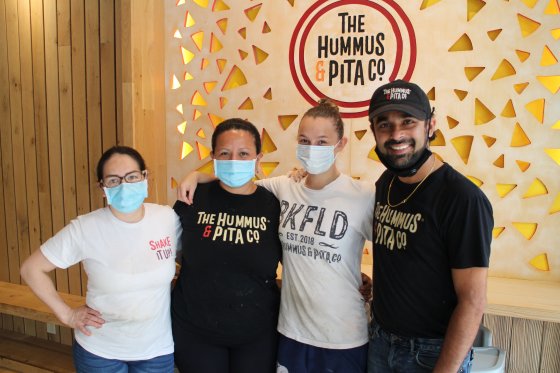 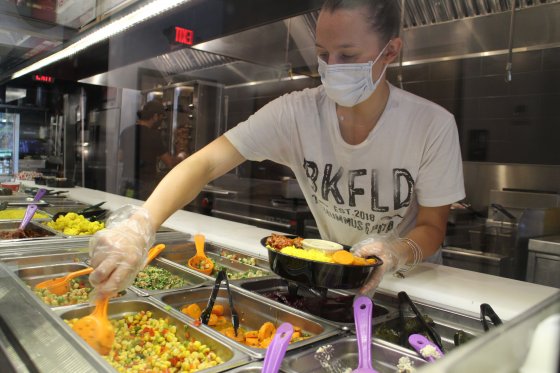